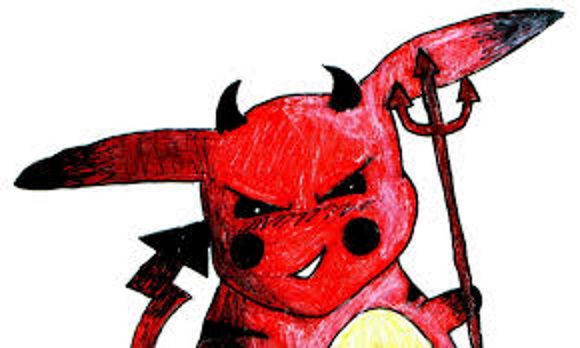 My immediate thought with this madness was that Star Trek: The Next Generation episode “The Game”, where Wil Wheaton and Ashley Judd are trying to avoid playing an addictive augmented-reality game spreading among the Enterprise crew.  I also thought about the South Park episode “Chinpokomon”, where a Pokemon-like franchise is clandestinely being used by the Japanese to incite American kids into rebellion against the government.

The mind-control aspects of this game seem obvious to me, but it’s not so to many people, so here are some ways you might imagine this game being used by nefarious agencies, like the CIA, foreign governments, Nintendo, hackers, etc.

It’s true that they can track your phone now anyway and hack into your camera.  But if you have you phone in your pocket, in an inaccessible place, etc., that is useless. Pokemon GO makes you take your phone out and activate it.  This is more power and control over when your phone is active and where it is active.

In addition, there may be a specific person or place they want to spy on and have no camera on it.  Pokemon GO allows the game admin to drive cameras to specific places or people that are currently not on the grid.  There are already reports that Nintendo will allow McDonald’s and other businesses to buy sponsored Pokemon placement.  Place Pokemon in your store, drive people looking for Pokemon into your store, profit!  This is a ready mechanism for the CIA to direct people to specific places at specific times.

Check out this really creepy flash-mob in NYC, people looking for some rare Pokemon.  Imagine that kind of power in a coup or revolution, like the kind just attempted in Turkey.  Real-time organization of masses of people against specific targets.  Think protest rallies, marches, government buildings, politicians’ private homes, etc.  Anything is possible.

It’s like the video game The Sims, where an all-powerful game player directs the semi-free-willed Sims around their daily lives and choices.  Except this time it’s happening in physical reality.  Come to think of it, I would not be surprised at all if Maxis comes out with an augmented reality Sims game in the near future, after Nintendo’s insane success with this game.

And if you think Pokemon GO is just an innocent little game, the technique is what is important here, not the cutesy characters.  As the South Park episode pointed out, what is cute and innocent in one moment can quickly be turned into controlled, sinister manipulation.  Once the mechanism is in place, the power is in place, and the superficial veneer becomes irrelevant.

Blood and Soil and Woods

Twitterspeak: the shrinkage of language