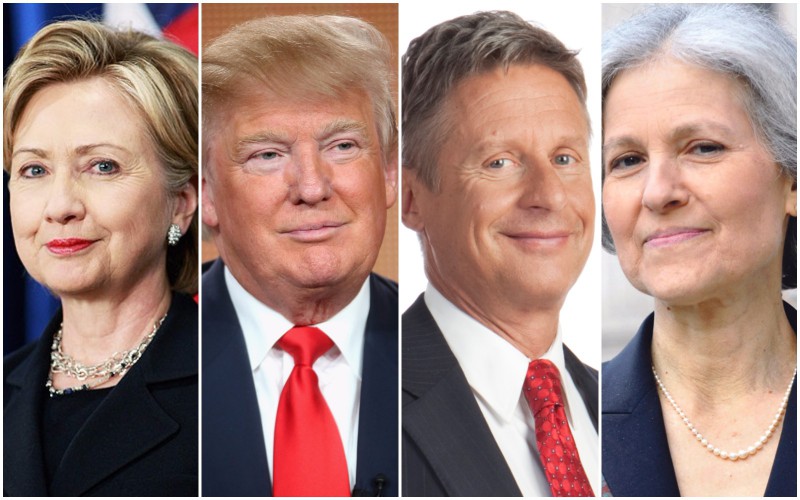 How is Gary Johnson affecting the 2016 presidential race?  Is he helping Hillary or Trump?  How does Jill Stein factor into it?  For an in-depth analysis, I looked at 4-way presidential polls going back to May 2016, aggregated by RealClearPolitics (CSV data download).  Perhaps unsurprisingly, Gary Johnson seems to hurt Trump more than Hillary — but Jill Stein turns out to have a very surprising role!

Let’s look at how the combo of Johnson and Stein affect the race.  Here we see a positive correlation between their combined share of the vote and Clinton’s numbers.  This means Johnson and Stein take votes from Trump, on average.  But how does Johnson affect things individually? 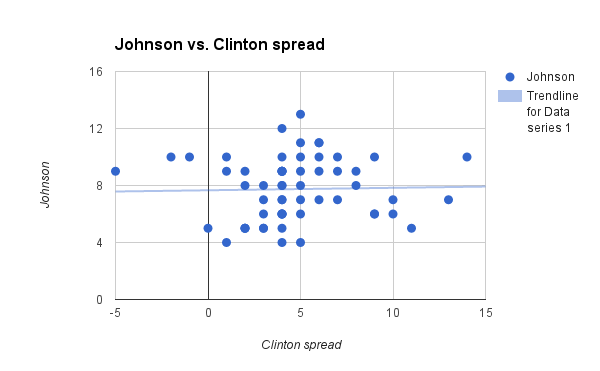 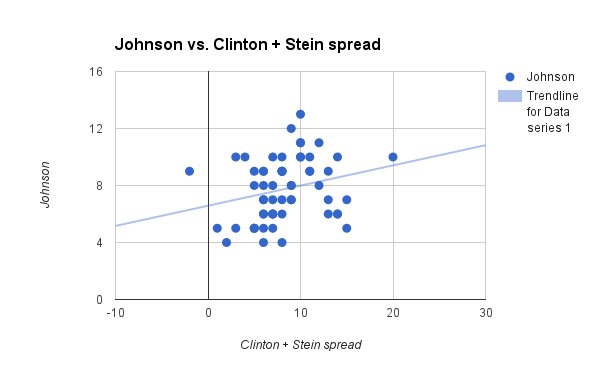 To make things even weirder, Stein seems to help Hillary even more than Johnson does.  That implies Stein is taking more votes from Trump than Gary Johnson does!  How can that be?? 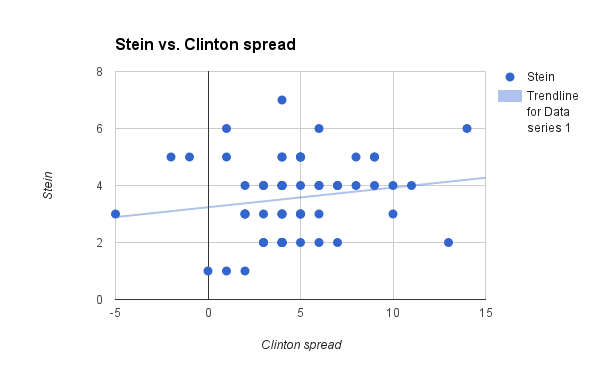 Finally, a moment of clarity.  There is a solid, almost 2:1 correlation between Gary Johnson and Jill Stein’s poll numbers.  That means they magnify each other, instead of subtracting.  Probably because whenever the media gives Gary any attention, they also mention Jill Stein, so she gets a boost.  There is a strong “third party bloc” dynamic here, more so than the individual third party candidates.  Ideology seems to have little effect compared to simple media exposure. 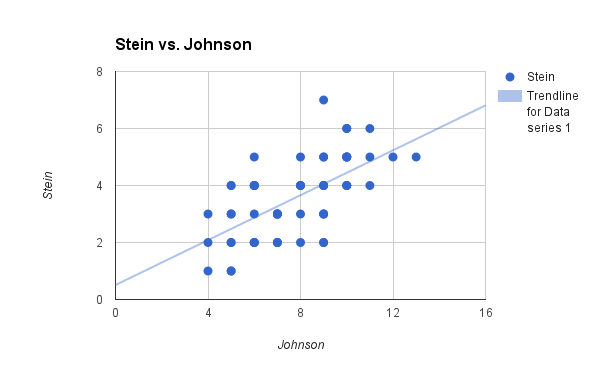 The best explanation I can think of is that there is a contingent of potential Trump voters, who evenly split between Gary Johnson and Jill Stein.  That would account for why Johnson has a smaller effect on Hillary’s lead than does Stein.  The rest of Johnson’s supporters would otherwise evenly split on Trump and Hillary.

In the end, Jill Stein acts as a magnifier for Johnson’s effect on the race.  Trump would definitely be better off if they both left the race, but his biggest marginal gain would be Jill Stein dropping out.

Prediction: A 2-way debate in late September will shift the focus back to Trump vs. Hillary and diminish the attention on Gary Johnson (and Stein).  This should be a net positive for Trump, the debate results notwithstanding.  A 3-way, or even worse, a 4-way debate, would potentially be devastating for Trump, as it would give a national platform for the third party bloc which is on net drawing votes from Trump.  However, as the clock ticks towards the election, it is likely that the race will be forced into a Trump-Hillary binary, diminishing the third parties, and giving Trump a much-needed small boost.